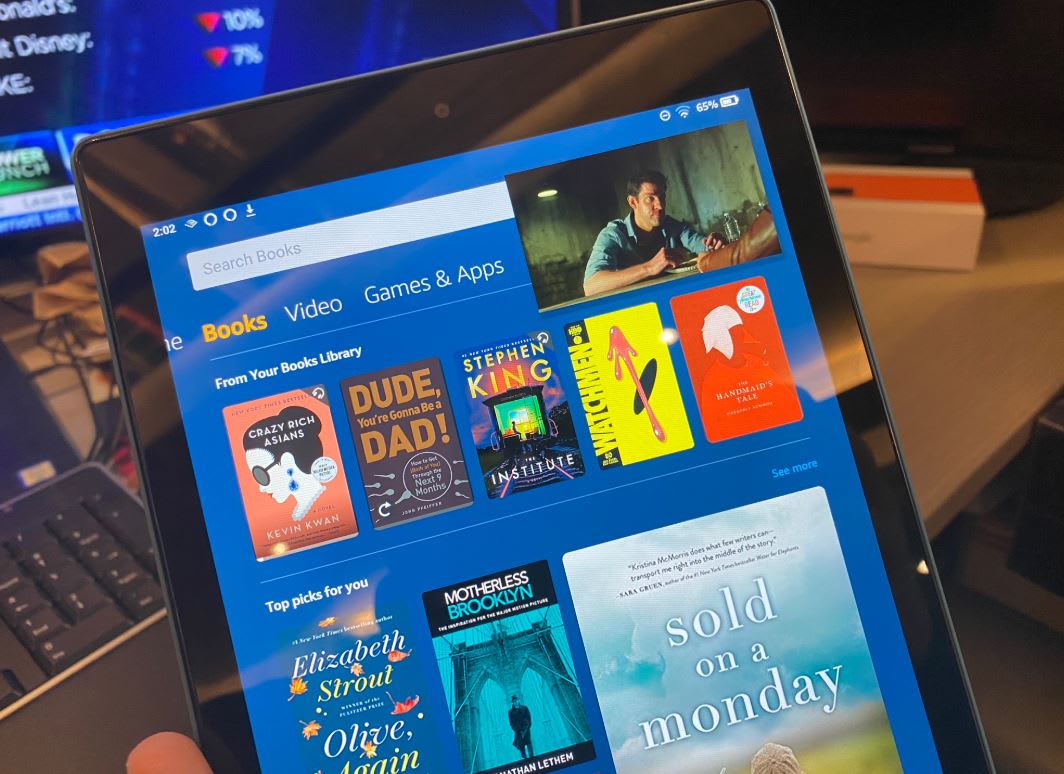 Amazon's latest version of the $149.99 Fire HD 10 tablet gives you almost everything you'd want out of a tablet for less than half of what you'd pay for an iPad.

Amazon has been updating the Fire HD 10 every two years, and this is the third version. Like past versions, its main selling point is the price. But, this year, Amazon made a few upgrades that make it even more compelling: It's 30% faster than earlier models and charges up faster. The battery life is also great.

Amazon doesn't disclose how many of these tablets it sells, but they help Amazon's business in many ways. People who buy them get front-row seats to Amazon's services, including its online store, Alexa voice assistant, Kindle books, Amazon Prime Video, Amazon Music, Audible audiobooks and more. But users aren't locked into Amazon's world and can download other apps, such as Netflix, Spotify and more.

If you want a tablet for passing time on the plane and don't want to spend $329 for an iPad, or use lots of Amazon's services anyway, then the Fire HD 10 Tablet is the best tablet you can buy.

Just to keep things in perspective: The Fire HD 10 tablet costs $150, so there's nothing here that's really going to drop your jaw. But, you get a lot for the price.

I love that it's a big door into Amazon's services. All of my Kindle and Audible books are here for reading and listening to (though reading books on the 10.1-inch display feels a little weird). I have quick access to Amazon's library of Prime Video content, can download and watch anything on Hulu or Netflix and can stream music from Amazon Music, Spotify and more. It's all about consuming content, and there is plenty of stuff to help me pass time just lounging on my couch.

The 1080p HD screen is fine. It's not the sharpest, brightest or most colorful out there, but it's good enough for movies and sharp enough for reading. It's not pixelated like the screen on the $49.99 Fire 7 tablet. And speaking of watching movies, there's a fun new picture-in-picture mode (also available on iPads) that lets you continue watching a movie or TV show while you're doing other things, like shopping on Amazon.

The speed bump in earlier versions is noticeable. I have earlier models of the Fire HD 10 tablet which have gotten a little sluggish over time. My personal Fire HD 8 is a lot more sluggish than the Fire HD 10, which opens apps pretty quickly.

Unlike the iPad, Amazon includes support for expandable storage. So you can add a microSD card to increase the amount of space you have for storing movies before your next flight. In fact, you should buy the $149.99 32GB model instead of the $189.99 64GB model, since you can add in a 128GB microSD card for about $20.

There's also a "Show Mode" that turns the tablet into a smart-assistant device with a screen — like the Amazon Echo Show — when you're not using it. So, you can ask for recipes and follow along on the screen, see sports scores, check the weather, video call with people and more. Alexa is also available whenever you want, even outside "Show Mode." Just say "Alexa" and speak your command.

Most exciting: Amazon, until now, has included older micro USB charging on its tablets. It's slow, and Amazon is pretty much the only major gadget maker still using it. But, with the Fire HD 10, Amazon moved to USB-C. This enables faster charging — a full charge in 4 hours with the included 9W charger, or up to 3 hours if you have a 15W charger. That's a big improvement over earlier 10-inch Fire tablets, which had to stay plugged in overnight to get a full charge.

Battery life is really good, too. I can practically watch my Fire HD 8 drain, but the new Fire HD 10 is way better. I turned off Wi-Fi and started playing a movie I downloaded on repeat beginning at 8 a.m. At 1:49 p.m., I still had 66% battery left. That's right in line with Amazon's promise of up to 12 hours, though you'll see less if you're surfing the web or streaming movies and music.

Finally, there's still a headphone jack. It doesn't come with a pair for you to use, but the jack is there if you need it.

It's tough to knock a tablet that costs $150 when there's not much out there competing with it other than Amazon's other, cheaper tablets. But I have a few qualms.

First, it feels kind of cheap, because it is. It's made out of plastic, so you don't get the nice metal edges or body that you do on the iPad. Also, the cameras aren't that great. I looked blurry when I checked out my mug using the 2-megapixel front-facing camera. I wish it had a wide-angle lens with better clarity for high-quality video chat, but I know that would add more to the price.

The stereo speakers are good, but the positioning is unusual. Normally I'd expect one speaker on the top of the device and one on the bottom, so they'd be on the left and right when tilted into landscape mode, which is how most people watch video.

Instead, they're both on the left if you're holding it vertically, which meant I heard sound only from the left as I was reading and listening to jazz. It was weird. When you flip it into landscape mode, the speakers are on the top left and top right, so you do get stereo surround sound, but overall it seemed like a clunky and unnecessary design choice.

You should also know that the cheapest $149.99 model has ads on the lock screen — that's partly how the company is able to sell it for such a low price. You can get a model without ads for $164.99 or pay the difference to remove the ads whenever you want.

Finally, there are some apps available on the smaller Fire Tab 8 that aren't available here, such as The New York Times Crossword. That's a bummer, since I love doing those on my tablet.

Should you buy one?

The Fire HD 10 tablet is a great deal if you've held off on buying an iPad because of the price, especially if you already use a bunch of Amazon services.

You don't get all of the productivity apps or the high-end design of an iPad. But, you do get a really good tablet with tons of content that can help you pass the time on an airplane or while sitting at home.

If you want a new tablet for yourself or your kids but don't want to spend a lot, then get the Fire HD 10. It's the best $150 tablet you can buy.