Months after it spurned a $1.5 billion offer from Wesfarmers, shares in rare earths miner Lynas Corp have spiked on reports that the US military intends to pay for much of the construction of a crucial new processing facility.

A US military tender for the construction and operation of a heavy rare earth separation facility in Texas is set to close within days, with details of the tender recently reported by Reuters.

The US military is backing the facility because it wants to ensure it retains access to heavy rare earths integral to advanced modern military hardware. Industry experts say Lynas has the capability to be a part of the US plan. 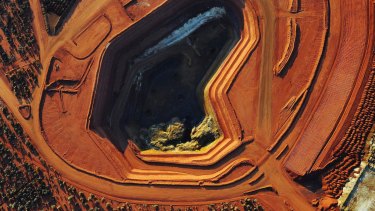 Lynas’ Mount Weld mine in Western Australia, the richest known rare earths deposit in the world.

China dominates the production of rare earths but Lynas is a major player in the global production of the valuable minerals, giving the ASX-listed miner a strategic advantage as nations seek to secure supply.

Shares in the ASX-listed Lynas Corp surged in response to reports of the US military tender, jumping 9.7 per cent to close at $2.37.

Rare earths could become a bargaining chip in the long-running US-China trade war, with China threatening to stop the export of rare earths to the US.

"The [US] Department of Defence has requested companies with a capability to construct and operate a heavy rare earths separation and refining operation in the US," said Dylan Kelly, mining analyst at stockbroker Ord Minnett.

"Lynas is the only firm in the world (excluding China) with suitable feedstock, intellectual property and experience to do so," he told The Age and The Sydney Morning Herald.

Rare earths are crucial components of key pieces of military hardware, he noted, and the so-called John McCain Act dictated that the US could not buy certain materials from China.

"Every new Joint Strike Fighter needs 250 kilograms of rare earth materials in it, in order for it to operate. The US defence applications are quite significant, whether it be smart bombs, planes or ships. Modern technology in this day and age requires this material," he said.

Lynas is the only firm in the world (excluding China) with suitable feedstock, intellectual property and experience to do so.

Mr Kelly said Lynas now sells 1200 tonnes of a mixed heavy rare earths carbonate into China each year in a concentrated form. But this year it revealed a plan to set up a joint-venture arrangement to separate the material at a facility in Texas.

The material would be converted into the highest value, heavy rare earth oxides and be sold to customers like the US Department of Defence.

"The US wants to make sure that it's growing its own industry all the way down the value chain. Australia offers an excellent supply of these materials," said Minerals Council of Australia chief executive Tania Constable.

"We have every commodity, rare earth element on the periodic table available in Australia. So we make a natural partner for countries that are seeking diversification of supply," she said.