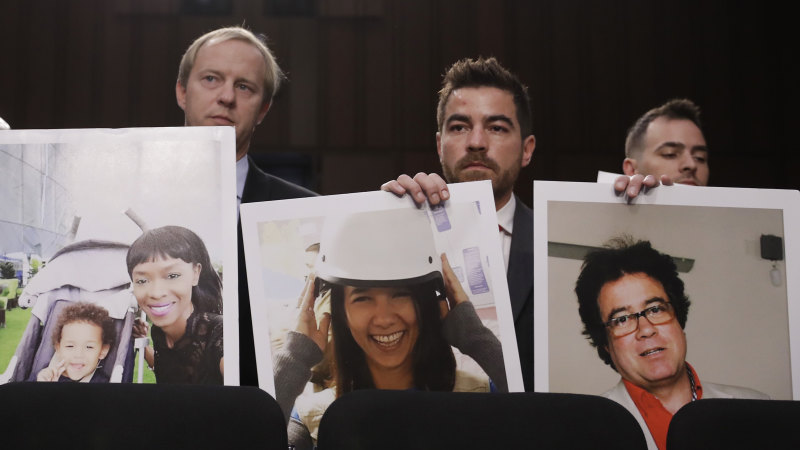 Internal emails from Boeing employees could strengthen the legal case for families claiming the company's push to minimise the training needed for new 737 MAX aircraft contributed to two crashes that killed 346 people. 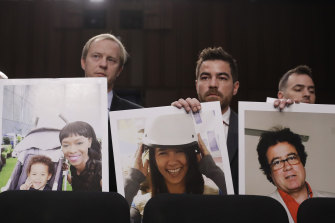 Family members of crash victims holding up photographs of their loved ones at a US Senate hearing last year.Credit:Bloomberg

"The lack of training is essential to our case," Green said. "These documents show that Boeing led the FAA around by the nose and they confirm everything the families have alleged."

Boeing is accused in the lawsuits of seeking to bring a new airplane to market as quickly as possible to compete with Airbus SE's A320 neo. Part of the purported sales pitch was that pilots who already were qualified to fly the older 737 models wouldn't need costly and time-consuming new training for the MAX.

Both the Ethiopian Airlines crash and the Lion Air plane going down in the Sea of Java in 2018 have been blamed on the 737 MAX's Maneuvering Characteristics Augmentation System, which caused the airplanes to dive shortly after takeoff.

Since then, all 737 MAX planes were grounded, sales of Boeing jets plunged, and Chief Executive Officer Dennis Muilenburg lost his job last month. The shares tumbled, and the company faces wrongful-death lawsuits filed by victims' families that could cost $US2 billion ($2.9 billion) to settle, as well as legal battles with investors, pilots and workers.

On Thursday, under pressure from US politicians as the airline seeks to get the 737 MAX flying again, Boeing disclosed a new trove of internal documents related to development of the aircraft. The company had turned them over to investigators for the FAA and Congress last month.

In the court of public opinion this has to be bad for Boeing, any way you slice it. This smells very, very bad.

In one 2013 memo, a Boeing employee recommended describing MCAS as an addition to an existing speed trim system, instead of as a new feature: "If we emphasise MCAS is a new function there may be greater certification and training impact."

In 2016, after the FAA had provisionally agreed that only computer-based training was needed for pilots transitioning from the 737 NG to the 737 MAX, a Boeing employee said in an email: "You can be away from an NG for 30 years and still be able to jump into a Max? LOVE IT!!"

Then in June 2017, a Boeing employee referred to Lion Air officials as "idiots" for seeking more simulation training on the MAX for its pilots, records show. Lion Air abandoned the idea after the planemaker convinced the airline it was unnecessary.

The new disclosures could be quite damning for Boeing and could support claims for reckless disregard for safety, which may entitle the plaintiffs to punitive damages on top of compensation for losses, said Robert Rabin, a law professor at Stanford University.

In addition, the revelations related to the FAA may put pressure on the agency to be super-cautious in allowing the 737 MAX back into the air, Rabin said.

"In the court of public opinion this has to be bad for Boeing, any way you slice it," said Timothy Ravich, an aviation law expert at the University of Central Florida. "This smells very, very bad."

In a court of law, on the other hand, Boeing may try to keep the internal documents out of the case as either unsubstantiated rumour, known as hearsay, or as unfairly prejudicial, according to Ravich. But given that it's unlikely that Boeing will want to go to trial with the families of the crash victims, the internal communications probably will give leverage for the plaintiff lawyers to secure a favourable settlement, Ravich said.

"Boeing has to put this to bed as soon as possible," he said. "The 2013 MCAS memo is ample and unequivocal evidence that Boeing tried to push this airplane to market to stem the tide of Airbus orders."

With deliveries of new MAX jets halted by the crashes and orders cancelled, Boeing disclosed on Tuesday that it had lost the title of world's largest planemaker. Deliveries last year tumbled to 380 jetliners, less than half the 863 tallied by rival Airbus.

"These documents do not represent the best of Boeing," Greg Smith, who was the company's interim CEO until David Calhoun took over this week, said in a message to employees on Friday. "The tone and language of the messages are inappropriate, particularly when used in discussion of such important matters, and they do not reflect who we are as a company or the culture we've created."

The company said in November it had reached settlements with more than 60 of the Lion Air lawsuits filed in Chicago, where a federal judge has signalled he may grant Boeing's request for pending claims to be resolved in Indonesia rather than the US.

What the emails indicate to me is that there are not just rotten apples at Boeing, the whole orchard is infected.

Aside from the lawsuits by families of crash victims, Boeing is defending against claims by pilots affected by the grounding of the airplanes.

Lawyers seeking to represent as many as 5,000 pilots in a class action already filed an amended complaint on Monday in federal court in Chicago.

"One of the new causes of action that we added captures succinctly the range of deception by Boeing, which was characterised by the tone of the recently released emails, and other behaviour witnessed by our clients," Joe Wheeler, an attorney for the pilots said in an email.

"What the emails indicate to me is that there are not just rotten apples at Boeing, the whole orchard is infected."