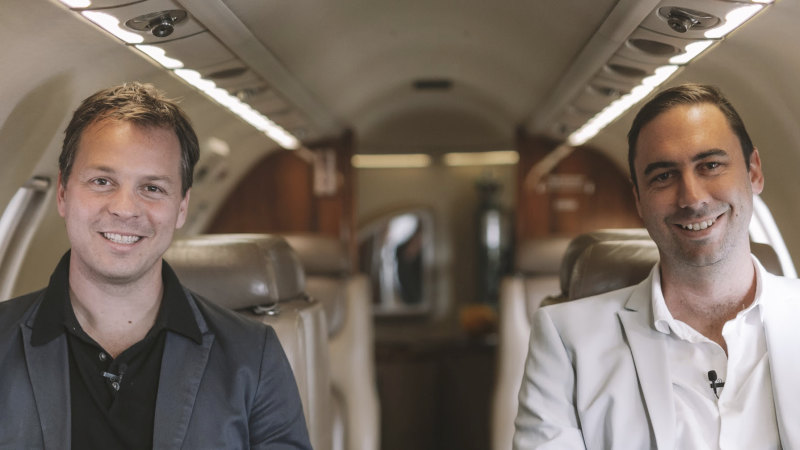 Private jet startup Airly says inquiries in December increased 35 per cent on last year as flight disruptions, some of which are a result of the bushfire smoke haze in capital cities, played havoc with business executives' schedules.

Luke Hampshire, Airly's co-founder and chief executive, said the startup, which is aimed at business travellers, was taking advantage of a drop in flights arriving on time on the busy Melbourne to Sydney route.

Figures from the federal government's Airline On Time Performance report from November shows 51 per cent of Melbourne to Sydney flights arrived on time, down 5 to 7 per cent on previous months. 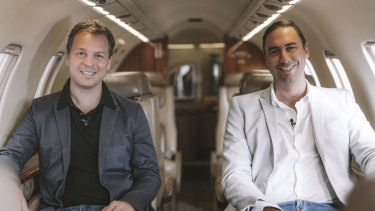 Alexander Robinson and Luke Hampshire are the founders of private jet startup Airly.

"Airly is finally a real alternative for the airlines on the Melbourne and Sydney routes and they do a lot of the marketing for us with their unreliability," Mr Hampshire said.

Qantas, Jetstar, Virgin and Tigerair all fly the Melbourne-Sydney route.

The private jet startup was founded by Mr Hampshire and Alexander Robinson in 2016 and enables members who pay $99 a month to fly from $1219 per person one-way when there is sufficient demand for a flight.

"We make it zero risk, when a member proposes a flight they don't pay until it is activated," Mr Hampshire said.

We are making a business model work in a lean market that has a lot of potential.

Last year the startup turned over more than $500,000 and Mr Hampshire said it was looking to double revenue in the next year with domestic disruptions providing an opportunity for the fledgling player.

On several occasions, Mr Hampshire said Airly had flown into Bankstown after Sydney Airport withdrew its slots with passengers saving three to four hours on their flights accounting for airline delays, slot congestion and traffic.

Mr Hampshire said the private jet market in Australia was small with Airly only signing up 80 members so far but there was a global opportunity if the startup could "remove the stigma" from flying privately. 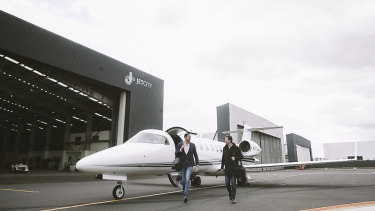 "There is a lot of attention around climate change and we have already put steps in to combat that," he said. "We choose the more efficient jets and fill flights that would normally be empty and we are introducing a 100 per cent offset at a cost we will fully absorb."

Hyper Capital founder Gabriel Jakob said he was a regular user of Airly and was keen to invest.

"There aren't many startups you can try before you invest in them," he said. "That was a big thing. We also really liked that they are using an underlying technology to manage their clients and businesses. We like businesses that disrupt and this is a very disruptive business."

However, Sam Iliades, chief executive of Australian Corporate Jet Centres, said there were a number of weather factors impacting flight reliability and bushfire haze was not significant.

Mr Iliades said the smoke haze had not affected demand as small aircraft are bound to the same weather restrictions as all airlines.

"Sydney was down to one runway for many days as a result of crosswinds which basically reduces capacity to anyone."

Australian Corporate Jet Centres has also experienced increased demand but Mr Iliades said this was due to customers wanting efficiency and flexibility.

"There is a lot of frustration when there are cancellations, people ring up and want to hire an areoplane to go to Melbourne or Sydney but often the price puts them off," he said.