Driving a vintage car from Chennai to Puducherry 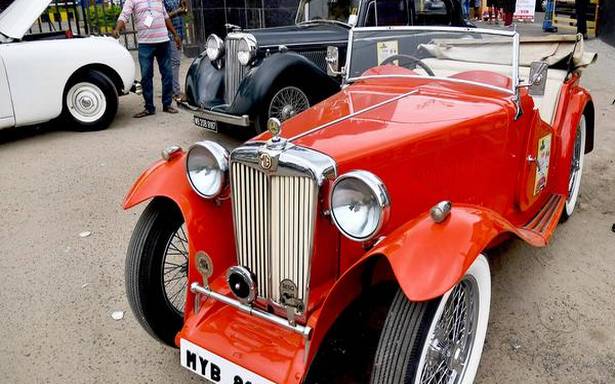 From Ambassador and Dodge to Rolls-Royce, the 11th edition of the Chennai-Puducherry heritage rally saw some forgotten icons grace the road

Using automobiles to denote the passage of time was an ingenious move adopted by Martin Scorsese in his film The Irishman.

Robert De Niro’s character Frank Sheeran drives different cars — all of which qualify as vintage by today’s standards — throughout the film’s runtime (from a ’51 Hudson Hornet to a 70s Lincoln Continental) as he makes the climb up the mob ladder.

But a shiny Morris Eight, which rolled into the Mayajaal multiplex complex on East Coast Road near Kanathur, stood as proof that Scorsese’s concept could be inverted on its head.

Owned by city-based Vernon Saldanha, the British manufactured car was one of many evidences of timelessness on display at a vintage car rally organised by the Madras Heritage Motoring Club (MHMC) over the weekend.

Blast from the past

It was the 11th annual rally held by the club; as many as 72 cars and 23 motorcycles took a 320 kilometre round trip to Puducherry via East Coast Road. For Saldanha, who only purchased his first vintage vehicle, a Ford Anglia — the flying car Harry Potter and Ron Weasley drive in the Chamber of Secrets film — in 2010, it was the seventh time.

“It is just the thrill of taking the cars out on a nice road trip to Pondy and back,” says Saldanha, when asked about the roots of his interest in vintage automobiles.

He was particularly eager on this occasion, as it was the first time in over five years since he purchased the Morris Eight that he was taking its wheel. “It has been a long journey with the Morris. It just came out of restoration.”

For some like Balraj Vasudevan, the rally is about reminding the younger generation of the times that were.

“We don’t want the public or the young people to forget how automobiles used to be, and what better way than showing them these cars in running condition than some display in a museum,” says Balraj, who is also the president of MHMC.

The club itself is backed by influential patrons, one of whom was on hand to direct the cars out of the parking space and onto the East Coast Road, once the rally was flagged off.

The man was MS Guhan, the AVM production studio scion, who also had a few of his vintage cars taking part in the rally. The star attraction among his collection was the 1956 model Wolseley 15/50. Some of the earlier Wolseley models were famous for its use as police vehicles in England.

The 15/50 model, though, is more famous for its presence in one of the best films from the 1960s — A Hard Day’s Night, which featured The Beatles at the height of their stardom.

Ranjit Pratap, one of the committee members of MHMC, is another petrolhead.

Sample this: the man owns 15 different Mercedes. The oldest one in his collection is a 1924 Ford Model T (you could spot one of these on Peaky Blinders or in the Brad Pitt movie The Curious Case of Benjamin Button), but the most attractive one is the 1932 Rolls Royce Phantom II. To him, the idea of collecting vintage cars is similar to an interest in purchasing art.

While it may be amusing for us Instagram beings to watch the black and white era come to life, it takes hours of hard work and commitment to keep these vintage vehicles going.

“As preservers of heritage, we are particular about originality. We can’t just go to a service station, we cannot allow for the service person to pull out the old parts and replace it with new ones just to make it run. We are very particular about the parts. The car either has to be serviced or we buy the kit and get it redone,” adds Balraj.

The cars are not only subjected to being photographed by inquisitive onlookers, the owners field a variety of queries as well. “Everyone wants to know how much mileage the cars give,” laughs Saldanha.