Mystery 380,000 square-mile 'blob' of hot water is floating towards New Zealand – and could wipe out local sealife 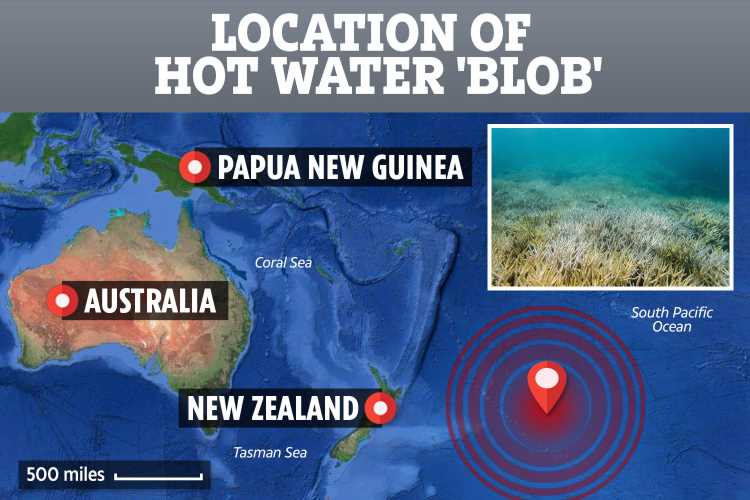 A huge patch of the Pacific Ocean is heating up fast and scientists are baffled.

The blob of hot water is located 497 miles east off New Zealand's South Island and is almost six degrees Celsius warmer than average. 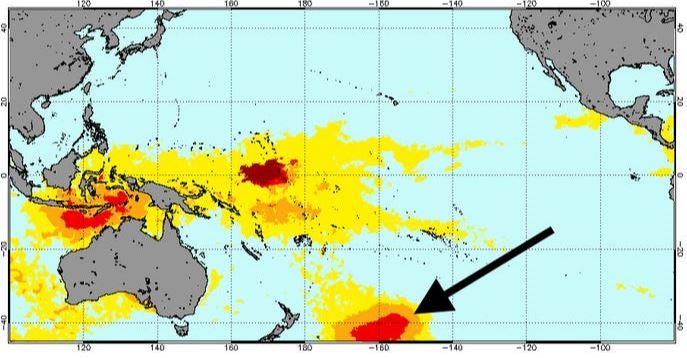 James Renwick, a scientist at Victoria University in Wellington, New Zealand, told The New Zealand Herald: "Sea temperatures don't actually vary too much, and a degree, plus or minus, is quite a big deal, and this area is probably four degrees [Celsius] or more than that above average and that's pretty huge.

"I don't have an explanation for it."

One possibility is that the blob of hot water was created by a marine heatwave, which can occur if freak weather causes the ocean to absorb more heat than normal. 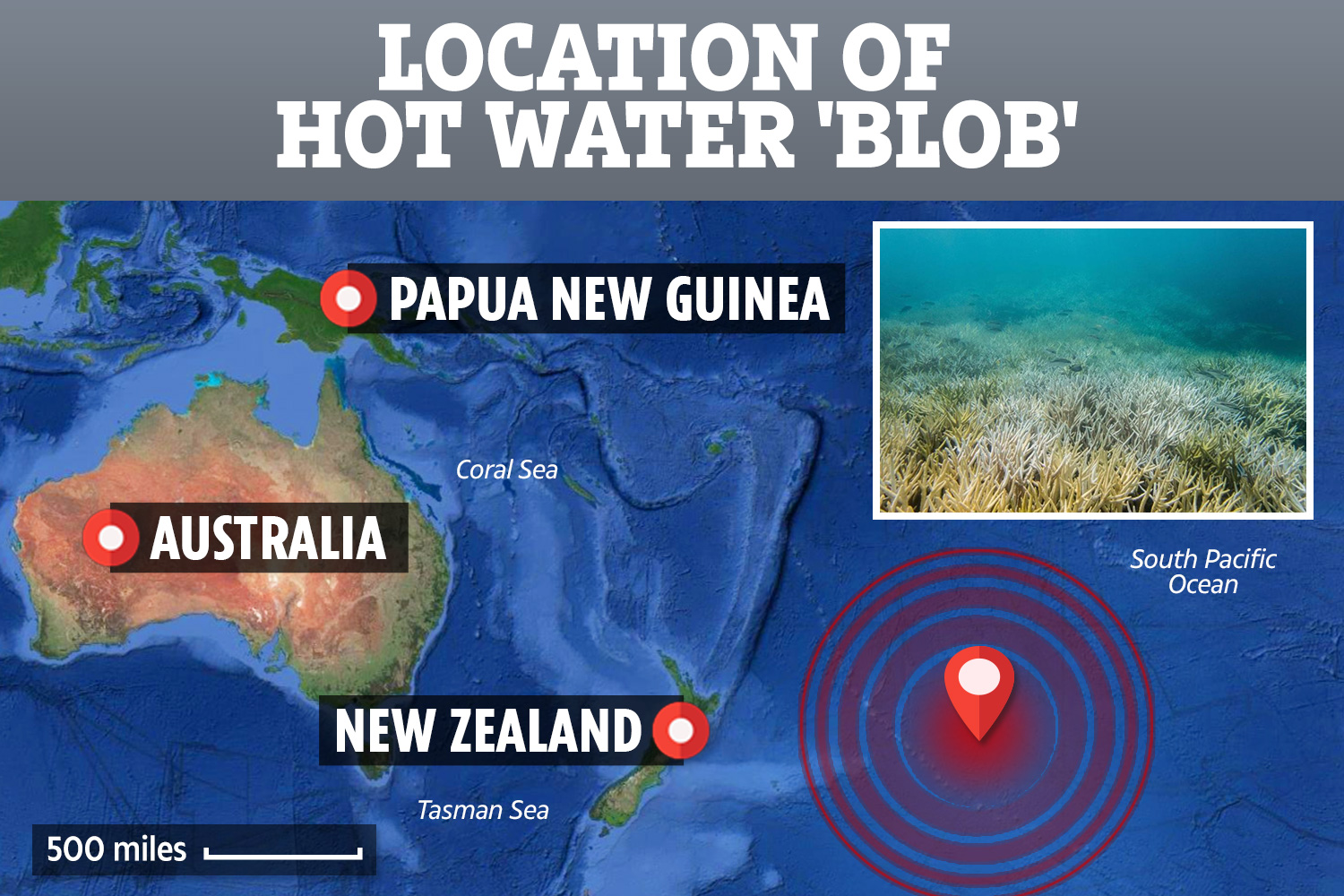 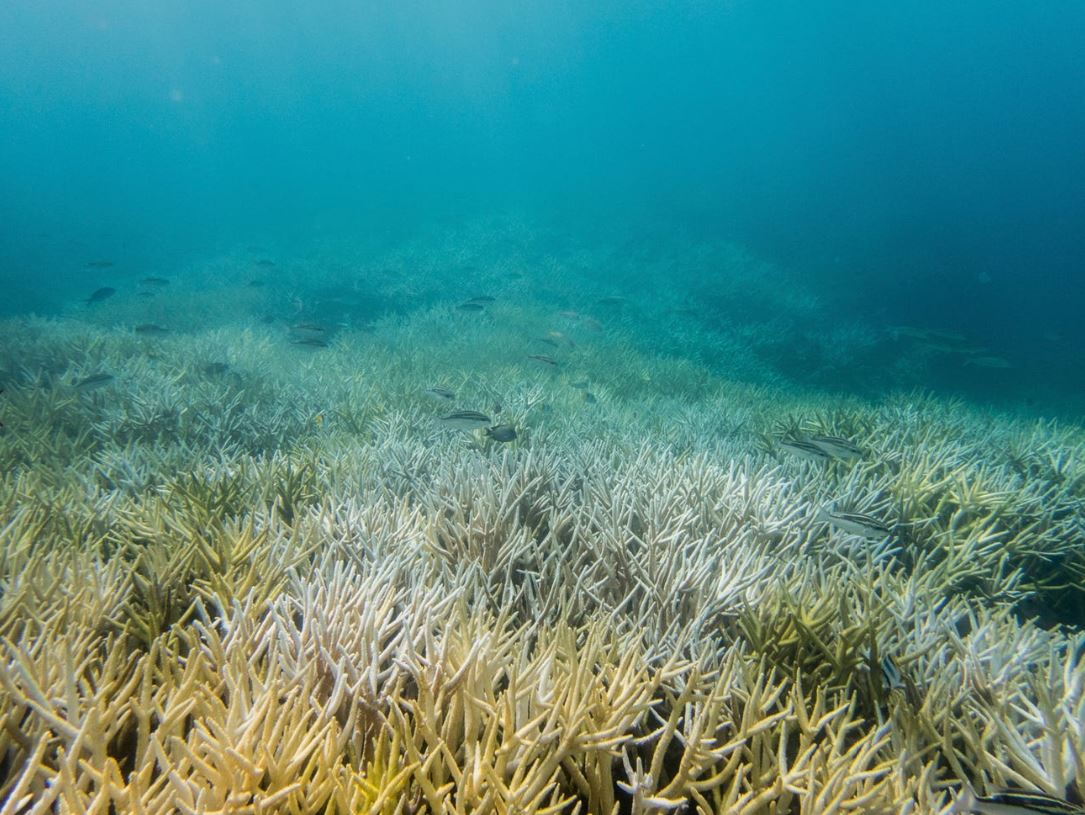 Sometimes weather conditions can also prevent the release of heat from the ocean.

Renwick told The Guardian that an anti-cyclone about the region in question could be the freak weather culprit.

These high-pressure weather conditions create a heavy atmosphere and this pressure can cause stagnant conditions.

Renwick said: "It's probably a very thin layer of ocean that has warmed up, and there hasn't been any wind to cool it for several weeks." 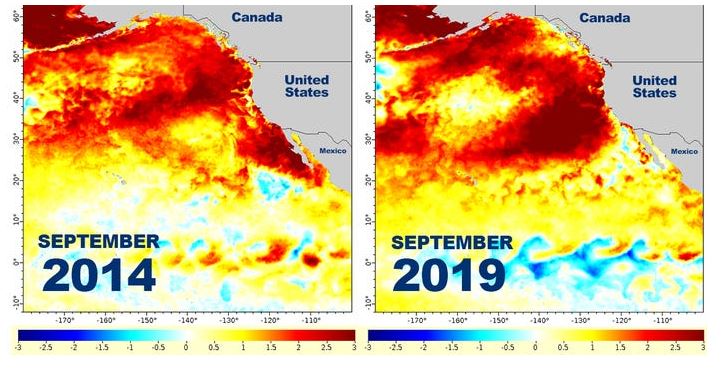 New Zealand has experienced a similar marine heatwave in recent years but that only saw water temperatures rise by three degrees Celsius.

Climate change is said to make these heating events worse as the ocean is observing extra heat.

This means if climate change continues at the current pace then marine heat wave events will likely get worse.

Large heated areas of water can have a negative impact on sealife.

In 2014, a marine heatwave between Hawaii, Alaska and California led to a decline in sea-bird populations and coral bleaching.

Scientists nicknamed this event 'The Blob'.

The Blob struck again in the same region in 2018 and left seals and whales stranded and dead on the Californian coast-line.

Coral bleaching threatens to affect entire ecosystems if the coral dies off completely.

Coral reefs are brightly coloured and delicate but when coral gets stressed from things like higher temperatures, the marine creatures expel the algae they need to feed from and turn white.

Eventually, coral that can't feed itself will die and this spells disaster for all the other creatures that depend on coral reefs being their home.

Increased water temperatures also result in fish and sharks abandoning their traditional habitats in search of a cooler place to live.

Fans of seafood can also be negatively impacted as spikes in temperatures can cause an increase in the algal blooms that can contaminate creatures like crabs and make their meat poisonous.

Here are the basic facts…

In other news, a shocking video has revealed the scale of wildfires that raged across Earth in 2019.

Britain is set to be 'as hot as Spain' in three decades, experts warn.

And, climate change is said to have cracked open a 'Cold War nuclear tomb’ so it's now spilling deadly radioactive sludge into the Pacific Ocean.

What do you make of this massive 'blob' of hot water? Let us know in the comments…