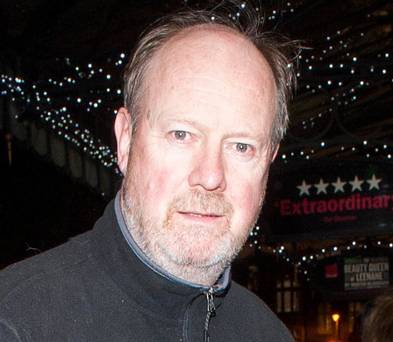 The actor and playwright Pat Nolan is probably best known for playing the role of Barry O’Hanlon in the RTÉ soap opera Fair City.

He grew up in Ballyfermot and Bluebell in Dublin and is now living in Avoca, Co Wicklow. He is married with two sons.

He co-wrote the play Take Off Your Cornflakes with Irish actress Rose Henderson.

The play – which is about Alzheimer’s disease – will be performed in a number of venues nationwide in the coming months, including the Droichead Arts Centre in Drogheda, and Dublin’s Civic Theatre and Pavilion Theatre.

For details of more of the venues where the play will be on, visit rosehenderson.com.

What’s the most important lesson about money which your career as an actor has taught you?

Always have a rainy day fund – lots of them!

The best advice you ever got about money?

‘There’s no pockets in habits’ – it’s an old Dublin saying which means that you can’t take money with you when you die, so spend it while you have it.

What’s the most expensive thing about being a parent?

Education. Once children start school, it’s a constant drip-drip of payouts for books, uniforms and so on.

I have a thing for old coins like the florins. I remember the halfpenny and the farthing with the bird on it. That was back when money was money; you were aware money was in your pocket because of the weight of it. I like the old Lavery notes too.

Apart from property, what’s the most expensive thing you have ever bought?

A car. I had to buy a brand-new Toyota Verso car when the kids were young. It was a seven-seater with loads of room in it for the children – and to fit the dogs in the back.

What was your worst job?

I loved my first job. My father was a breadman in Halligans Bakery and he used to bring me along on Saturdays to help him out. I remember getting up at 7am; it seemed like the middle of the night. At the time, it was great to earn a few bob. I’ve never had a job that I hated; I’ve never felt the dread that some people have going to work. I love working with the arts – the more you do, the more you learn.

What was your biggest financial mistake?

Ages ago, one of the Fair City cast had an idea of buying a racehorse. I came up with the horse’s name: Saint Genesius, after the patron saint of actors. I had never been at a race meeting in my life and I thought it would make a good day out. It was a beautiful horse, but it’s still running!

What was your best financial killing?

I’ve never had one. I have a load of pop magazines from the 1970s and I joke with my family that the collection will be worth money some day.

Are you better off than your parents?

I’m self-employed. My dad always worked nine to five and my mum worked until she was married. I’d say I’m better off than my parents, as my wife and I both work, though there’s a big difference between 1960 and 2020 when it comes to inflation and prices.

If you won the Lottery, what would you do with the money?

I’d keep working. I used to make a joke that I’d buy a theatre [if I came into money], but I’ve grown out of that now. To become a millionaire in theatre, you have to start out as a billionaire, according to Andrew Lloyd Webber. So if I won the Lotto, I’d look after my family and the important things. I’d pay off my family’s mortgages and so on.

I like Spotify for sampling music and if I like something, I’ll buy the hard copies. I still have a load of CDs. I haven’t got into new vinyl yet. I have a lot of the original vinyl anyway.

Would you buy Irish property now?

I’d steer clear for now due to Brexit. I wouldn’t have the money anyway. I’m happy where I am.

What three things would you not be able to do without if you were tightening your belt?

DVDs and CDs, as I love music and films; and petrol for getting around.