Valentine’s Day just got boozier with this chocolate whiskey 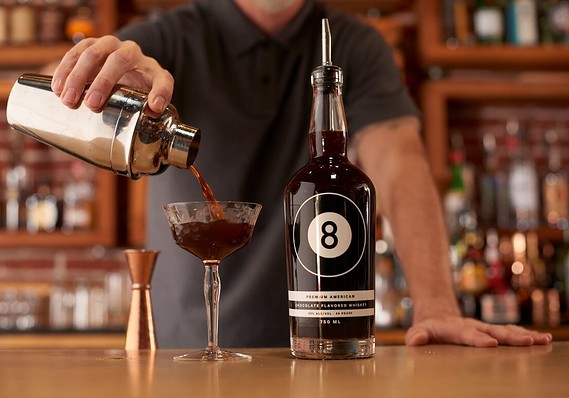 The back story: A box of bonbons is a classic Valentine’s Day offering. But what about gifting chocolate in boozy form?

There are plenty of options available, including chocolate liqueurs and a chocolate-flavored wine. But 8-Ball, a newer offering, combines two different favorites in one — chocolate and American-made whiskey.

Brand founder Paul Thomas says he was looking to create a breakthrough spirit and had an “epiphany” that this pairing could be just that. But the actual reality of making the product proved difficult due to the science involved. That is, the molecules in whiskey and chocolate don’t easily bind together, he explains. “I took as a challenge for myself to crack the case and obsessed with it in the lab for a year,” he says.

Eventually, 8-Ball was born and the spirit, which is produced and packaged in San Diego, Calif., hit the shelves last September. Thomas’ timing may be right, at least on the boozy side: Sales of American whiskey, a category dominated by bourbon, increased by 10.8 percent to $4 billion in 2019, according to a new report from the Distilled Spirits Council of the United States.

What we think about it: Lots of chocolate drinks, alcoholic and non-alcoholic, overwhelm you with their sweetness, but 8-Ball proves to be a subtler sip. It has a mild cocoa flavor with just enough added oomph from the booze. Thomas says you can also pick up notes of oak, maple and vanilla.

How to enjoy it: This is easy enough to sip chilled from the bottle or on the rocks — think of it as a dessert in a glass. It also works well poured over ice cream.